About The Other Night 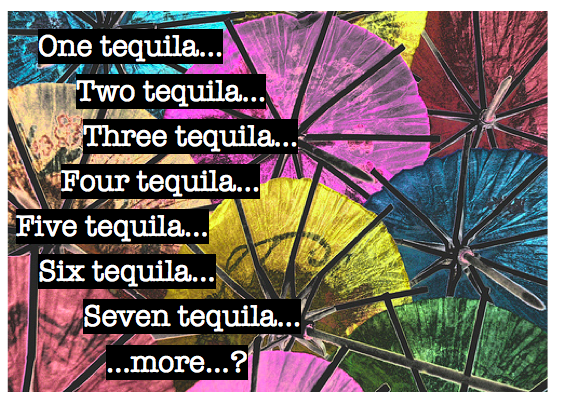 dude. i was reading TFLN and this one made me snort and think of you:

484: thanks for singing to me while i puked last night

Hahahaha.  Do you remember I made you stop mid cotch so I could wee?  Soon as I was finished, we flushed and you started again.

LOL.  You’re a fun drunk.  A vommy one, but a fun one.  Your Boyfriend swearing at the chick in the bathroom still has me snorting.

i do not remember that. i also don’t remember how i got from movida to the car. Apparently I high-fived the bouncer on the way out – which I do *not* remember either. Bloody hell, I’m a freakin’ liability when there’s tequila involved.

i remember feeling fine, until i got into the car and The Boyfriend started driving. i remember phoning you to tell you i was kotsing. And laughing.

and i remember kotsing more at home. and giving you wet wipes because we’d run out of loo paper. and i remember The Boyfriend telling that chick in the girls’ loo to fuck off, but i do not remember snorting.

he was very cross with me when i got home. what did Jon say?

LOL.  Jon was just impressed that you didn’t kots INSIDE his car.  There was a bit on the outside door though, he’s having it washed today.  He was also well impressed that your boyfriend walked into the girls bathroom.

I snorted my face off.  The chick was like “hey, this is the girls bathroom, leave her alone!” and your boyfriend says “hey fuck off man, that’s my girlfriend!”
I snorted when they looked all shocked and hurt while we walked past.
*************************
From: Expensive Mistakes
To: Sheena Gates
Date: Mon, Mar 8, 2010 at 11:49 AM
Subject: Re: Re: fyi: fuck you
tell Jon i’m sorry. i remember puking into a woolies bag on the way to The Doors. and you telling me to throw it out the window when I was done, and me flinging it up into the air and saying something like “i hope it splats on a car windshield behind us”

I had to sleep on my Boyfriend’s side of the bed, because it was closest to the toilet.

I remember my Boyfriend telling me something about some chick telling him he needed a pair of leather pants. I wonder w-tf that was about.

I remember you and I snorting our faces off at Jon. You know why.

I remember you and my Boyfriend  trying to force me to drink water, and me refusing – why the fuck do people ALWAYS try make PUKING PEOPLE DRINK WATER – IT ONLY MAKES THEM PUKE MORE?! I mean, what’s up with that?

I remember a strip-show of sorts (not me) to some song off the Pulp Fiction sound track – anything else I’m missing?

I do not remember much about the stripper dance thing. I also don’t know wtf my Boyfriend was on about with some chick telling him he needed leather pants.

I do know, however, that I’m a very cheap date. I drank one double-vodka-double-lime, one Savanna Dry, one glass of champagne and about 10 tequilas. Definitely must, at this point, say thanks to SezLeigh for plying us with tequila. And must, also, avoid her and her tequila like the plague unless I’ve had a huge meal before going out with her.

I stupidly stuck to my usual ‘eating is cheating’ plan when it comes to getting drunk – ie: getting drunk super-fast on an empty stomach. For some reason, I always think that’s a grand idea, even though I usually land up regretting it. Clearly I never learn my lesson.

I remember taking @za5’s camera off him, and taking loads of pictures. They were all blurry. Must have been an indication of how drunk I was. Either that, or I’m blaming the camera.

Don’t forget to include:

A clapped out old car nearly swerving into your kiff mommy car, then cutting in front of Jon’s car and upsetting him so much that he breaks from his usual cool, calm & collected state to open his window, hoot loudly and swear at the driver.
Me challenging Jon’s Audi to a dice with my peugeot 206 GTI and telling him that you as my co pilot would make us win, cos Durban chicks are the fucking awesome.  All whilst you’re still kotsing into a woolies grocery packet.  Because you’re classy like that.  Hey, at least it wasn’t a PEP or Pick n Pay bag!
Telling your Boyfriend to fuck off because you were fine to go to Doors after Movida, “I just need to cotch one more time and I’ll be hundreds”.  I’m fine, fuck you!
*************************
And that, my friends, is how you know you had a good weekend – when you have to have an email conversation with your BFF to clarify all the details.

This entry was posted in life things and tagged birthday parties, Jon, Movida, Sheena Gates, tequila, The Boyfriend, The Doors. Bookmark the permalink.

11 Responses to About The Other Night