For some unknown reason, upon meeting my Boyfriend for the very first time, I decided to be honest with him. Don’t ask me why. But perhaps it had a little something to do with the fact that about a week after meeting him I decided to move up to Joburg, from Durban. I decided to accept the offer to study at a certain law school and I decided that I rather fancied this blonde-haired, blue-eyed, constant foot-in-mouth man.

I decided to be honest with him. No holds-barred honesty. Honesty in a way I’d never permitted with anyone else, before. Mostly because I had no intentions of being with anyone long enough for them to actually get to know me, lest they discover that there’s more to me than meets the eye. Lest they discover my insecurities, my issues, you know, my stuff.

Honesty, I decided, was the best policy. If he stuck around, knowing the truth, then he was the real deal. A test of sorts, I guess. I told the truth, the whole truth and nothing but the truth. And I heard nothing much more about it for the next few months. Then the questions started. The probing. The questioning of motives and, what felt to me, like judging.

It’s a horrible feeling, being judged by the man who is supposed to love you more than anything in this world. The same questions would crop up, again and again. I’d try and answer as best as I could, but the fact that I could never really give concrete answers to most of them, because that particular question never really occured to me at the time. And with at least five years between me and the person I used to be, has allowed for my memory to suppress a lot of the details.

Perhaps ‘suppress’ is a bit of a strong word. Perhaps I’ve just replaced all of those memories with happier, purer ones. Ones I’ve made since 9 December 2006. All the right things. What happened in the past, and the person I used to be, has been left behind, for the most part. The only thing that remains is the perpetual grumpiness and a tendency to be selfish and crave alone-time.

I am a better person (mostly) for meeting The Boyfriend. I am a nicer person, too. I don’t dwell on my past, I don’t question my past-motives and I don’t regret anything I’ve done. Because – like i’m fond of saying – everything happens for a reason. My Boyfriend doesn’t understand this. He thinks that because I regret nothing, I have no conscience. My reply is always that my conscience was ever-present and knew full-well the difference between ‘right’ and ‘wrong’ but I chose to ignore it.

The questions have started again, these last few weeks. Even more than before, and with earnest.

Sometimes my answers are different, when I do choose to answer the questions. This creates problems. Which really makes things complicated. How do I explain that the only reason why my answer is different, is because I don’t really remember anymore, without sounding like I’m lying?

He says his questions are mainly curiosity, but sometimes I can’t help but feeling an inkling of how-could-you behind his questions. And so, as I’m writing this, my Blackberry vibrates with  text message. “the problem I have with your past….” is how it begins.

So fucking over this. How do I make it stop.

Honestly, honesty doesn’t really seem all that worth it, right now. 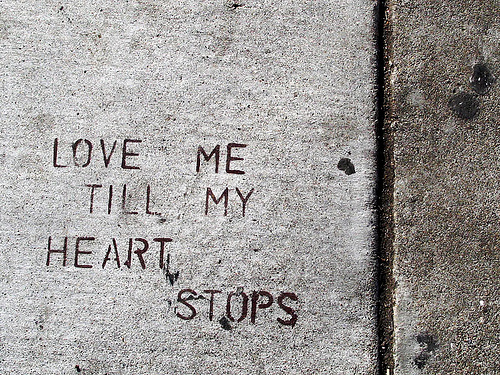 This entry was posted in life things, love things, relationship things and tagged heart, honesty, how to make a smart girl feel dumb, issues, love, mistakes, relationships are weird, The Boyfriend, the past, this shit makes me look bad. Bookmark the permalink.

17 Responses to Honesty: Worth It?