So You Think Your Boyfriend Is Weird? 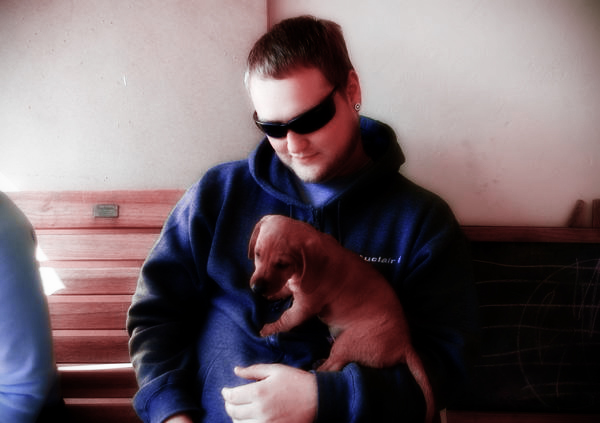 Three years together is a long time – plenty weird has filled those three years, let me tell you. Plenty weird, bizarre and OCD-related shit goes on in my house on a daily basis. It’s hard to narrow it down to five things, but I’m gonna try.

Why five things? I’ll tell you. Because if you list five weirdasscrazy things your boyfriend does, you stand a chance to win a super-rad BlackBerry Bold 9000 Smartphone.

What’s this in aid of? Well….a weirdasscrazy show has started on VUZU-TV. It’s called ‘The Vampire Diaries’ and it’s about a girl who discovers that her boyfriend has a secret that’s a little weirder than most. He’s a bloodsucker. But he’s hot For more info on the show, check out the channel website.

So here’s my entry:

Well. When we go to a restaurant, all the condiments and items on the table must be lined up geometrically, with everything being square and perpendicular to everything else. He cleans the cutlery before he uses it. Food is not allowed to touch the borders of his plate, and different food groups are not allowed to touch each other. He fills his glass up to a certain point, and then no further – this requires precise measurement and slow pouring. If he’s filling his water bottle up for gym, this can sometimes take up to 10 minutes, because he has to get the level exactly right. It often involves tipping out the bottle and starting again. The contents of his cupboard have to be packed just so and if the maid gets it wrong, it’s the end of the world.

His DVDs are alphabetically arranged and cross-referenced by category, as are all his Playstation games. And while we’re on the topic of Playstations, he got a Playstation 3 for Christmas, but still hasnt taken it out of the box because he’s waiting until he gets a new TV that is capable of HD – because he refuses to play games on the TV we currently have, because it’s not HD. Everything in his life must match. The fact that he has a Sony Playstation makes him want to buy a Sony TV. Which seems simple enough, but when you consider the fact that all the other appliances in our house are LG, and his parents bought him an LG DVD player for his birthday (over a year ago – it’s still in the box because he is waiting for a new TV) – he’s torn. Torn between LG and Sony. What a dilemma, right?

2. He’s not entirely certain of his female physiology, although that never stopped him from successfully (and pleasurably, I might add) exploring it. My Boyfriend, up until last year sometime, thought that females passed urine through the opening of the vagina. Yes, he was under the impression that it came out from the same hole men want to put it into. He was very surprised when I gave him an anatomy lesson and explained to him that that little man-in-a-boat (his words) that he loves to rub on, is actually where the peepee comes from. Yes, this from the man all his friends called ‘The Mac Daddy’ and from the man who claimed to have done Biology until Matric. Clearly his mind was elsewhere the day that was taught in class. If I remember correctly, he blames his distraction on having a hot Biology teacher.

3. He’s a barrel of contradictions, is my beloved Boyfriend. Whenever he tells me I’m a contrary, grumpy bitch, I have to laugh. Because he might as well be talking about himself. He wont change shitty nappies (refuses point blank and has probably changed 5 in the 2 years the Kid has been filling nappies) but has no problem fishing poos out the bath if The Kid took a dump while playing with his rubber ducky and water gun.

He gets squeamish when I complain to him about period pains and bleeding from the vagina, but he was perfectly okay with seeing the insides of my uterus and ovaries when his Kid was cut out of me while I was under general anaesthetic two-and-a-bit years ago. He wont eat fish or any kind of seafood, because it smells really bad. But is perfectly okay with eating canned pickled fish (which smells even worse, in my opinion). He hates chickpeas and refuses to eat them, but has absolutely no problem polishing off an entire tub of hummus in one sitting. He’s the most impatient person I know. Like THE MOST IMPATIENT PERSON I KNOW. Yet he took the time and had the patience to teach me how to parallel park. Even though it took about 7 hours and he didn’t shout at me once.

He laughs at what he calls ‘metrosexual fags’ who moisturise and use aftershave balm. But he has more face creams and aftershave balms and various other grooming products – more than I have, in fact. And spends longer getting dressed and ready to go out than I do. And I have two people to get ready – myself and my Kid.

3. His temper rivals mine at times. Which is something spectacular to witness. But instead of being normal about it, and refusing to back down, he has a serious conscience-attack and then feels like the worst person on the face of the planet. Why? It’s because he’s so upright and moral. Which comes – I’m convinced – from watching too much Bravestarr as a kid. One minute he’s yelling the place down, the next minute he’s apologetic and bashful about how loud he was. And how shitty he was. And how irrational he was. Yup, sometimes he rivals me in the irrational-girl-behaviour department.

One time during an argument I took my pillow and stomped off upstairs to sleep on the sleeper couch and put the aircon on, because it’s hotter than hell upstairs. He stomped upstairs and switched it off. As soon as he was downstairs, I switched it back on. He came back upstairs with a pair of sidecutters, and cut the plug off, so I couldn’t switch it back on. About five minutes later, he was upstairs with his toolbox, repairing it and apologising to me. Good thing I was too lazy to go downstairs and cut the plug off his TV, like I’d originally intended. Yes, our fights are legendary and our neighbours probably think we’re cooked. But the making up is great, and the fights themselves are exhilarating and funny. After the fact, of course.

4. He has fat days and bad hair days, just like I do. He has days where he stands in front of his cupboard, for over an hour, trying on everything in his cupboard and discarding it. Heaving huge sighs and getting crosser and crosser by the minute. I know better than to ask (and it took me about a year to figure this out) what’s wrong or to mock him about having a fat day. Sometimes we’ll even get in the car and I’ll compliment him on how good he looks, and he’ll sigh and get out the car and head back into the bedroom, take off his clothes and refuse to go anywhere. Much like I do on a fat day. Bad hair days? I know when it’s one of those, by the amount of time spent in the mirror with a comb, and by how much gel is in his hair when he walks out the bathroom.

5. Even though I like to think I’m the smart one in the relationship, really, it’s all him. I might be book-smart and have two degrees, but he’s the one with the life-experience. He’s the one who knows how to apply for finance for a car, who knows where to pay the electricity bill, who knows how to change a lightbulb and how to fix a broken cupboard door. He knows why my car’s brakes are making a squeaky noise, and he knows how to weld things and drill holes into the wall and how to parallel park. He’s the one who knows all the important stuff. All I can do is explain to you what the sub judice rule is and when you’d need to apply for a structural interdict.

All the stuff I know? Mostly useless. He’s the one who sorts my life out for me. Makes sure I don’t forget my lunch at home. Makes sure I have cigarettes and petrol in my car, that I take my car to the carwash, that my dogs get vaccinated and forces me to go the doctor when I’m sick.

With us being weird together.

This entry was posted in life things, relationship things and tagged heart, love, relationships are weird, The Boyfriend. Bookmark the permalink.

2 Responses to So You Think Your Boyfriend Is Weird?