When The Going Get’s Tough, The Smart Ones Take A Hike* 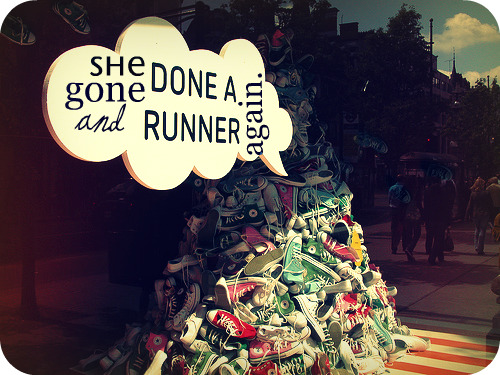 I’ve always been a runner. And I don’t mean the pounding-the-pavement kind of runner, I mean the pack-your-shit-and-run kind of runner. The going gets tough, and this girl goes shopping. Longevity in relationships was not one of my traits, and not something I considered important.

That was my life, and that was the existence I was happy with, until I met The Boyfriend. And suddenly I started becoming more okay with emotions. I didn’t say I became comfortable, just okay. I pretended otherwise, but still went on a holiday with his family and best friend, two weeks after meeting him. Moved up to Joburg, a month after meeting him.

Yes, a man played a big part in my decision to move cities when I was 22. I attributed the move (out loud) as being down to the fact that I wanted to study here. Studying was merely incidental. Studying had nothing to do with the move.  It had everything to do with him.

Him that drove me insane. Insane with anger at his insistence that the world and all it’s issues and all human flaws and mistakes are black and white. That there’s no grey in the world. No shades of black and no shades of white. Either or, but never in between. Insane with lust and desire. Insane with his stubbornness and his loudness. Him who’s never quiet, not even when he’s asleep.

Him that constantly needs my undivided attention. Him that looks after me and makes all my problems go away. The Boyfriend makes me a better person. Makes me grumpy, but still, I am better for having him in my life. He has shown me what it’s like to want to help other people, and to be more honest – with everyone, including myself.

He’s been responsible for a lot of positive changes in my life: attempting to be more communicative of my emotions, expectations, irritations, stresses and worries. Not procrastinating (as much). Opening my mouth and defending myself instead of silently seething.

He’s also obsessive. And has lately had issues with keeping that which has passed, in the past. He’s shouted and said bad words and we’ve fought and there were tears on both sides. I threatened to leave, but I didn’t. I’ve left before, more than once. But I’ve always returned. And something always keeps me.

No. I’m not scared to leave because I don’t think I could do it on my own, I’m scared to leave because of what I would miss out on. Every single day with The Boyfriend is different and presents its own set of challenges, difficulties, irritations, pleasures and comforts. Today is not the same as yesterday, and tomorrow will be different too. Life with The Boyfriend is that perfect mix of unpredictability with a measure of stability. It’s exactly enough to keep me on my toes, without sending me over the edge. There’s excitement and there’s passion. There’s grumpiness, moodiness and over-reacting. Of which we’re both equally guilty.

I no longer am a runner. I no longer have reason to take flight when startled. I’m also no longer that easily startled. I’m starting to become more comfortable with emotions, and I am okay with admitting that I think about someone else, before myself. I am in a place that I am secure in and I have no reason to leave. I have no reason to fear staying. There’s no fear of boredom, there’s no fear of infidelity and there are no worries about emotions and talking about feelings. Most importantly I don’t get that sinking feeling in the pit of my stomach, when he says ‘we need to talk’.

Now, when the going gets tough I no longer think that taking a hike is the smarter option. Taking the hike has become the easy way out. And, like my Boyfriend will tell you, I’m the kind of stubborn bitch that likes to do things the hard way. There’s the easy way, and then there’s MY way. And my way says there aint no quitting on this.

There are, of course, the times I wonder whether it’s worth it. Worth another argument,  more tears, or  more footstomping and name calling.

And then I realise. Of course it’s fucking all worthwhile.

And the thing that actually DOES makes it so?

Not knowing what tomorrow will bring. And knowing that I’d rather be around to find out, than not.

Does that makes any sense?

This entry was posted in life things, love things, relationship things and tagged growing up, heart, how to make a smart girl feel dumb, life, love, making lists makes me look busy, reasons to stay, The Boyfriend, there's a lesson in there somewhere. Bookmark the permalink.

8 Responses to When The Going Get’s Tough, The Smart Ones Take A Hike*