Because I Find It Impossible To STFU 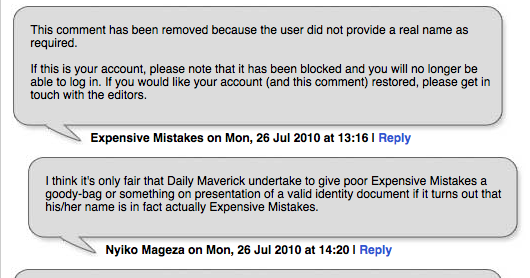 So there was this post. And I attempted to comment on it. Even though I usually refrain from commenting on any site that makes me sign up before I do so. I signed up, activated my account by clicking on the e-mail confirmation, typed in my 45cents worth of opinion, and clicked ‘submit’.

Only to receive an e-mail informing me that I’d neglected to read the T&C’s and obey the ONE basic, most important rule – to supply a real name. I supplied the next best thing. My Real-Online-Name. Expensive Mistakes*. The name by which the interwebs knows me best. The name under which I blog, tweet and bookface.

Even those people who know me in real life (from online, of course) call me ‘ExMi’. Hardly ever by my real name. Even those who know my real name and my real-name e-mail address, prefer to use my Real-Online-Name.

I get the reason for having a Real-Life-Name-Only policy – to prevent comment-trolls. I get that. But. Commenting as my real name, on said article, would have been pointless on account of how I’m *known* as Expensive Mistakes (ExMi for short). I’m accountable for everything I say as Expensive Mistakes.

You can reach me on my e-mail address, twitter, facebook, skype, gchat, linkedin, ning, everysingleotherbloodysocialnetworking tool – as ‘Expensive Mistakes’. When I sign up for anything – including 27dinners – I sign up as ‘Expensive Mistakes’. That’s the name I write on my name tag, when I attend these kinds of events. Had I commented as my Real-Non-Online-Life name, no one would have known who it was – and then I’d have looked like a comment-troll – a real one.

And so. I’ll respect the Real-Names-Only (explained to me as: “We don’t do pseudonyms, alternative identities, or anything not recognised by a real-world government”) policy, and instead reserve comment for my own blog. Also thereby proving that I am a real person, and not a spambot.

“i’m right up there with Nyiko and Eve – the right to freedom of expression doesn’t mean that retailers have a moral obligation to carry every single newspaper that is printed.

and is this decision, taken by Pick n Pay, enough to warrant a call for a boycott? I think not. Is it enough warrant an accusation that they’re not ‘friends of the media’? Negatory on that one, too. I doubt the so-called issue of “censorship” and “freedom of expression” even entered Kevin Korb’s mind. Instead, they were more worried about appropriately catering to their customers’ needs and requests.

In fact – I say that rather Pick n Pay should be congratulated for responding to their customers’ complaints, and for actually listening to them – how many other retail brands actually do that? Not many that I know of.

This doesn’t count as “censorship” – it’s simply a rational decision to fill that shelf space with something that customers are actually going to buy and enjoy.

Eve said it best: “Freedom of speech? Look it up, and decide which side of the fence you want to sit on. You can’t have it both ways.”

I’d go so far as to say perhaps you should look up the word “censorship”, merely choosing not to stock a newspaper does not fit the definition.“

And there. And that is my 45cents worth of opinion. Because I find it impossible to STFU.

And just a teeny-tiny Pee-Ess: Dear Editor, please may I be the exception to the ‘Real-Names-Only’ rule? It was my first time on the site..I liked what I saw…..and I’d like to comment again. As myself. Which, as we all know now, is ExMi.

If not, no hard feelings then. I’ll continue commenting on my blog, and on twitter.

16 Responses to Because I Find It Impossible To STFU