On The Lizard: So Over It And Can’t Do It Anymore

It’s official, I am the world’s worst person. I am one of those people that buys an exotic pet, and then a few months down the line, gives that exotic pet away. I fail. I throw my hands up in the air and admit defeat. But really, I just can’t any more.

Last year, sometime before the festive season – my darling beloved fiance gets it into his head that it would be cool to get The Kid (all of three years old) a bearded dragon for Christmas. Like everything he does, he researched the shit out of bearded dragons on the Internet, found a place to buy one, and there it was. In my lounge. This itty bitty reptile. 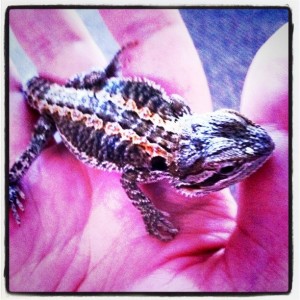 And it was totally cute at first. It was little, it was fascinating and The Fiance enjoyed feeding it baby crickets and The Kid enjoyed watching him. But then holidays were over and Fiance returned to work, and I was left (most days) with the task of catching baby crickets. Soon the task became catching almost-giant crickets – a task which is VERY difficult to do without tweezers (someone broke the big plastic pair we had from a first aid box that made the task a bit easier. I’m not pointing any elbows, but it certainly wasn’t me. So then I was forced to use SIDECUTTERS. To catch crickets. Do you feel my pain yet?). It’s also FUCKING difficult to catch crickets in a box, while trying to hold the lid of the box with your other hand, to prevent the other cricket occupants of the box from jumping out and escaping. For months and months I had boxes of crickets perched on my desk, right near my computer – and MAN do those things STINK and seriously. They never fucking shut up. Constant chirping. INCESSANT.

Keeping the box of crickets on my desk didn’t seem like such a bad idea – The Fiance wanted them there, because he sat IN MY CHAIR AT MY DESK when he caught Mojo’s food – until we got a kitten. A curious, persistent cricket-eating-cricket-LOVING kitten. Seriously, no jokes. When she heard the lid being pulled off the cricket tub – she was up the stairs and rubbing herself all over your face while you were trying to catch crickets and trying to stick her head in the box.

It was easy enough to fend her off by tossing her outside, but then Xena waited until I was out of the room, jumped onto my desk and swatted the box of crickets, spilling out 90+ crickets, cricket shit (which stinks) and gnawed-on carrot shavings, onto the new carpet in the loft upstairs. There were crickets in my couches, under my desk, in the cupboard, under the rugs, on my chair – FUCKING everywhere. At about a hundred bucks a pop for a box of crickets – which lasted about 2 weeks – I was, at that very moment in time, panic-stricken and a little bit ‘aw fuck, are you serious?‘.  I wasn’t about to let a new box of reptile chow go to waste – but at the same time, I didn’t want to actually have to TOUCH any of them. Damned if I did, and damned if I didn’t, I shrieked my way through catching at least half of them, with the assistance of the housekeeper. She was actually in hysterics at how hysterical I was and how much I shrieked, as I tried to corner a cricket and catch it in a tea towel. The cat cleaned up the rest of them – and it was only once I could no longer hear a single cricket chirping anywhere in my house, did I forgive her. 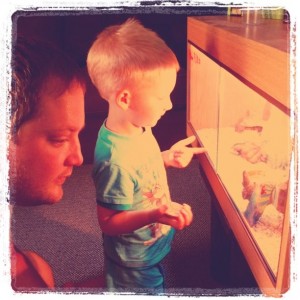 The Fiance got shat out for leaving his box of crickets on my desk when he KNOWS WE HAVE A CAT, DAMMIT and I demanded that we investigate other food sources. I bought a R120 bag of lizard pellets. Mojo never even TRIED to eat a single one of them. Just turned his scaly nose up and gave me the ol’ fuck-you eyeball.

Superworms and silkworms are marginally easier to catch with a pair of sidecutters (it helps that these fuckers can’t jump or scurry to another part of the box) but then the lizard can’t eat them every day, because they’re too fatty, apparently. Superworms also require their heads to be snipped off before you feed them to the reptile, on account of how THEY FUCKING BITE. Yup. Worms bite, people – they are not, in fact as HARMLESS as they seem. Consider that myth busted. Silkworms eat and crap A LOT – and I’ve just been through three years of nappies and shit, so I’m not cleaning up anyone else’s shit. In fact, i think the housekeeper tossed out the tub of silkworms, on account of how full of silkworm shit it was. Ooops.

Roaches (yes, hissing cockroaches) lasted (i.e: didn’t peg if you forgot to feed them – wtf is this anyway, feeding the food?) a lot longer than crickets, but come rain or shine, The Fiance had to take the box outside to catch them, and had to swear an oath to hunt down and immediately kill any escapees. All I had to do now was grate carrots for him to eat between his roach and worm meals. 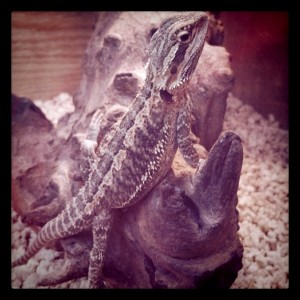 And I would have been totally okay with doing just that, as long as The Fiance still wanted the thing. But Mojo, after shedding four or five times, turned into a boring brown (I still think he’s beautiful) – when my beloved had wanted a yellow bearded dragon. Apparently the colour you get is luck of the draw (whatever), but he’s pretty much over Mojo. Novelty has worn off. And since Mojo has been nothing but a grumpy c**t whilst he’s been shedding, no one’s been too keen on giving him much personal attention.

In exasperation the other day, after being bitten by a worm, I tweeted in jest the other day and offered off my lizard, complete with terrarium and a free box of roaches. The Fiance had been debating putting the thing for sale on gumtree (after all, we spent a fortune on that terrarium, lighting, electricity, crickets and assorted other creepy crawlies) for some time, but I think he was more than a little relieved when I called him to say that Angel was interested in the lizard for her son.

The Knucklehead, as he is affectionately known by his mother, seems like he has what it takes to be a better lizard mom than me. And so, just as soon as I’ve persuaded (read: found the right bribe for) The Kid, I’ll be one of those awful people. One of those people that buys an exotic pet, and then a few months down the line, gives that exotic pet away.

But seriously. Can you blame me?

I’ve learned my lesson though. So this year, when The Fiance suggested getting The Kid a PSP for his birthday, I agreed without hesitation. Why? Because at least I won’t have to catch crickets for the PSP. That’s why.

19 Responses to On The Lizard: So Over It And Can’t Do It Anymore