On The Last Few Weeks And Finding That Thing Called ‘Happiness’. 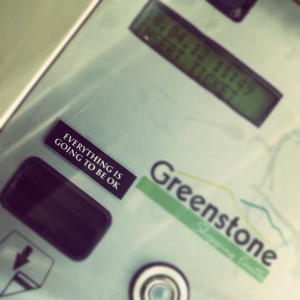 It’s no secret that I’ve been busy the last few weeks. Between a new job, trying to keep up with Body Thrills and spending as much time as possible with my fiance and our boy – there’s been time for little else. Okay, I lie. There’s been time for plenty of other things, but somehow I just never got ’round to making one of those things ‘blogging’.

Things I have done in the last few weeks:

I have started a new job. Duh. I mentioned as much in the first paragraph, and it might have been apparent on Twitter, too. What is this new job? I’m now a copywriter at the same agency that my BFF works at. Yup. How cool is that? The work has been amazing – varied, interesting, exciting. My schedule is managed for me to which goes a long way toward ensuring I don’t take on any more than I can handle and – so far – when I’ve left the office in the afternoon, I’ve not had to even think about work until the next day. Work stays at the office. I’m sure there might be the occasional late night in my future, but so far it’s looking good.

I have become accustomed (sort of) to peak-hour traffic and having to drive in it. I’m okay with this (mostly) because it gives me a little bit of alone-time – time to smoke cigarettes and listen to music. I’m contemplating doing the Gautrain commute, but my fiance doesn’t seem convinced. I’m also torn – mainly due to the alone-time aspect of doing the commute in my own car.

I have made over 300 Body Thrills products. Mainly at night, when everyone is asleep. Between sponsoring goodies for the Cape Town Girl Geek Dinners and the Runway sale a week or two ago, as well as regular through-the-site orders – there’s been a lot to keep my nights busy.

I have re-discovered how amazingly supportive my fiance can be – dinner is always cooked and ready when I get home from work, and I don’t have to do anything aside from relax. He picks up The Kid, he does the groceries/errands and even cooks. Once dinner is done, I bath The Kid and we watch cartoons for a bit, before The Kid and I curl up under his covers for a bedtime story or four. 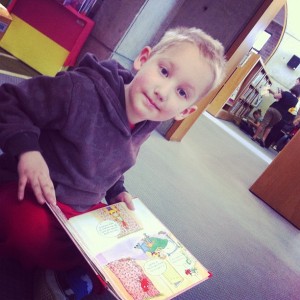 I have shared my love of reading with my Kid and am fortunate enough that he has responded with even more enthusiasm than I’d anticipated. We have plans to go to the children’s library every Saturday so we can indulge in stories.

And we kinda have to go that often, because we’re getting through 2 or 3 books every night. He’s not quite reading yet, but he definitely recognises and points out letters and can tell you the entire story almost verbatim, after one reading.

I’ve been constantly amazed at how quickly he’s growing, and learning new skills. He can write his name. That bit is huge for me. Because it feels like not that long ago when he was still in my belly and I was agonising over what to name him. Now he’s off to big school (Grade R) next year.

Weekends have been a blissful blur of spending time, at home, with my boys. Watching movies, cooking, reading books and lazing on the couch while they play Ps3. Yup, The Kid has gone from the handheld consoles to the real deal. He’s loving it.

Other things I’ve done: worn leopard-print, without shuddering or gagging once. Finally had the chance to wear this green blazer that’s been lurking in my cupboard for ages. Added to my collection of brooches. I’ve bought a kitsch home item or two. I’ve been indulging my blue willow fetish too. I’ve also given the Game of Thrones series (of books) a rest, in favour of reading my favourite kind of fantasy. And Stephen King, of course. “Under the Dome” is more awesome than I expected it to be. And anything by Margaret Weiss that has anything to do with The Dragonlance Chronicles is an incredibly enjoyable read, in my experience. “Amber and Ashes ” was no exception. I’ve also made an amazing roasted vegetable lasagna. I didn’t use a recipe, I just had this idea of what I wanted it to be like and sort of just rolled with it. It came out beautifully. 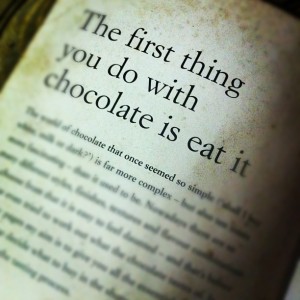 I’m now desperately looking forward to trying out Paul A. Young’s “Adventures with Chocolate” that I got from Penguin Books a week or two ago. It’s just been a bit difficult, because The Fiance and I have been trying our best to eat clean and healthy and stick to an eating plan (i.e: we’re dieting) and oodles of chocolate and sinful deliciousness just really doesn’t fit in with that. But. That being said, we’re planning a guilt-free day soon – and this recipe book will be on the top of my list of things to make that day. That being said, eating healthier hasn’t been all that bad – and I have tried a number of healthier dishes in the last two weeks.

We’re still house-hunting. After one near-buy, we’ve dusted ourselves off (again) and we’re making (yet) another concerted effort to find something. But secretly we’re just biding time in the hopes that the house that we really really really want, will drop a little lower in the price department, as the owners get desperate to sell and move on. The wedding has been tentatively postponed until this time next year. Kinda insane to think that if we hadn’t seen that house and hadn’t gotten it into our heads that we needed to buy a new house ASAP, we’d have been married for 4 days now. Yup. The wedding should have happened this Saturday that’s just gone by.

Despite all that. Despite all the house-setbacks and the not-being-married-ness of it all – I’m okay with everything. I’m happy. I’m busy. I’m cool with life right now. The universe and I are on good terms. 6 Responses to On The Last Few Weeks And Finding That Thing Called ‘Happiness’.