It’s Not A Weekend Unless..

Seriously. What a busy, busy weekend.

On Friday night I hung out with my Kid while The Boyfriend went to gym. Made pizza, watched the Garfield Show and the Flintstones, put my feverish Kid to bed, and fell asleep myself, on the couch watching movies.

Saturday morning was spent finding a gift for Angel’s bridal shower/hen party thing and getting lost around Joburg, by myself.

Saturday afternoon The Boyfriend dropped me off at Sheena and Jon’s after an argument with the GPS and each other. The Boyfriend went on to Glugster‘s bachelors’ party.  I walked in Jon’s front door  just as Sheena was drinking her herbalife shake, she forced me to taste it and I blurted out that it’s like a spermshake. Needless to say, the shake got refrigerated, and we were on our way out the door. Apologies if I ruined your milkshake for you, Sheena. But I’m sorry, that milkshake’s not gonna bring any boys to the yard. Eventually after a number of false starts (shit, I forgot the wine) we headed towards Centurion. We were late. Apparently it was my fault too. Wtf-ever.

We got there just in time. About 2.3 minutes before the Bride-to-Be arrived*. 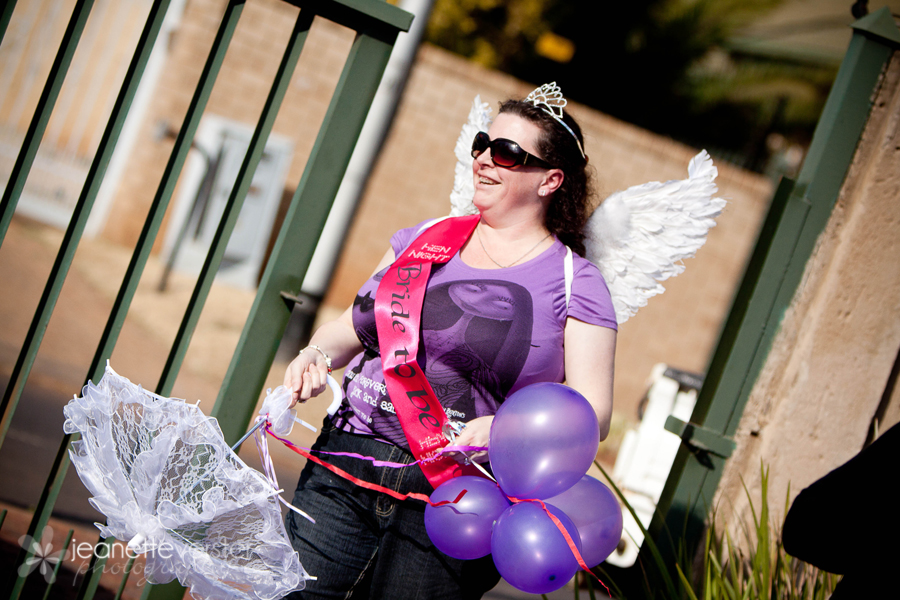 There was much laughter, much booze, loads of food. Games and hilarity ensued. And fuck, I look like a bit of a spaz in the picture below, but that’s my snorting face. Yes, whatever Angel and I were sharing was pretty fucking funny. 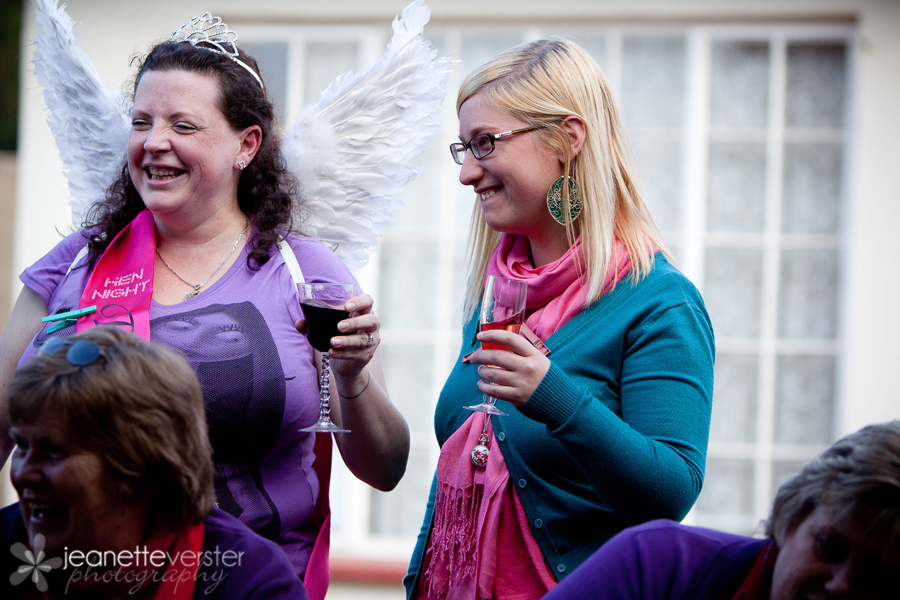 I won the peg game, by hanging around Angel. People had a tendency to mention the W word/B word/G word around her, so I’d soon collected a huge assortment of pegs from other people. Checkit my pegs. 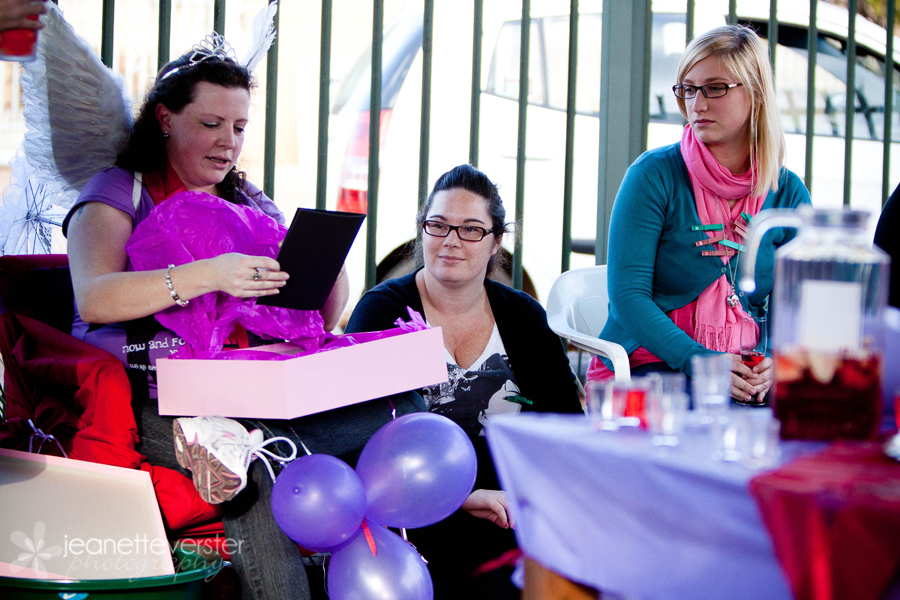 Opening Sheena’s present of awesomeness. The “Marriage Survival Kit” – very useful and funny gift. Good-gift-givers are good friends to have. 😉

Quotes of Note From The Day:

Then we decided to gate crash the men’s party, because yes. Women like to ruin their men’s fun. My Boyfriend was drunk. Very drunk. As was his BFF. (Yes, they’re inseparable) As was Glugster. The lot of them, and Angel’s brother were having a mini-rave in the lounge and stuffing cupcakes in their faces.

This was after I’d hooked a ride back to Midrand with Rebecca, and Briget (yes, BRIGET) and Laura came along for the ride. We took a wrong turn and went to Midrand via Diepsloot and Fourways.

I decided it was a good idea to follow Rebecca back to the Vale (she was going to collect her boyfriend) to go feed my dogs. After which point I’d return to the party. Rebecca lost me after 3 turns and I went back to Edenvale from Midrand via Rivonia, as I took the Roodepoort turn instead of the Durban/Germiston turn off.

I arrived home, fed the dogs and was about to get back in the car and return to the party, when I thought to phone my Boyfriend. I’d taken longer than I should have getting to the Vale, and he should have phoned by now to check if I was okay. Even if he’s drunk, he’s still concerned. So I phone him and he tells me that him and The BFF have just been arrested and they tried to evade the cops and there was a chase, and they got pulled out the car and shoved  to the pavement with guns at their skulls.

Awesome. He tells me not to worry, and to stay at home, they’d sort this out. I go out for smokes, there’s cops all over my neighbourhood. The place is crawling with flashing lights. I decide to go to my mother’s house to wait it out. Every twenty minutes or so The Boyfriend calls me to update me. The BFF is in a cell, he’s outside trying to bail him out. He’s fighting with the policemen. They’re threatening to throw him in a cell with The BFF if he doesn’t shut his mouth. Rebecca’s boyfriend phones mine, and tells him to keep his mouth shut and just wait it out.

Two hours later the two of them arrive at my mother’s house. No charges, just a R1000 fine for evading arrest and jumping four red traffic lights. They got off lightly. But I should have realised they weren’t in shit (and didn’t even think to ask) when breathalysers and blood tests weren’t even taken.

We leave my mother’s house and do what all sensible people who’ve just spent two hours in a policestation do. We go to the Doors and they carry on drinking. After all, they have a designated driver now (me). I had a great time mocking drunk people dancing. I must say, however, that Doors has changed somewhat. It’s not quite as rock-on-motherfucker as it used to be. Durbanites will understand the comparison when I say that Doors is more like Eighties, now.

In other news, The BFF admitted to finding my old blog. And to reading the entire four years worth of overshares stored therein. It was a bit weird, but after he explained to The Boyfriend that it’s funny, and that it’s all mostly about the love I have for my Boyfriend and that I’m an excellent writer, feelings on all sides were appeased. He even admitted that a post or two about The BF made him a bit teary.

Sunday morning was spent sleeping in. Grocery shopping and watching movies in the afternoon with my Kid. A busy weekend.

This entry was posted in life things, love things, relationship things and tagged Angel, blog things, fuck the po-leece, Glugster, heart, how to make a smart girl feel dumb, jeanette verster, me and the K53, Only On The EastRand, Rebecca, relationships are weird, Sheena Gates, Snowgoose, The BFF, The Boyfriend, The Doors, this shit makes me look bad. Bookmark the permalink.

14 Responses to It’s Not A Weekend Unless..