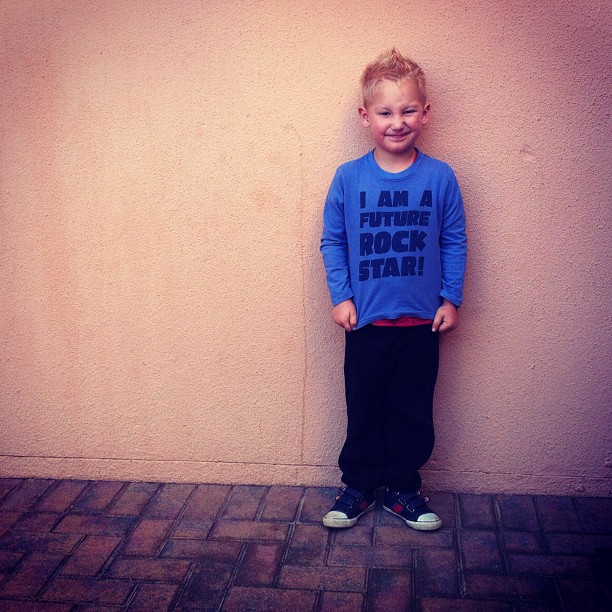 There’s never a dull moment with a spirited four-year-old in the house. He’s full of fart-jokes, unbridled laughter and has a serious amount of imagination. He’s growing into such a gorgeous, warm-hearted loving child – I almost can’t believe he’ll be starting school next year. Because it all passes so quickly, I constantly have to remind myself to keep a record of his antics.

You know you’re mother to a boy when your car is filled with Lego pieces, robots, pet rocks, underpants and socks. Never matching pairs – just one sock, its partner long-gone and missing.  You discover the cat covered head-to-toe in baby oil and talcum powder. When you ask that boy to explain himself, he can’t stop laughing hysterically. You foolishly allow him to whisper secrets in your ear, and instead of words, you’re startled by a wet tongue in your ear, followed by shrieks of laughter.

You have to administer the “bad ba-mato sauce” (bad tomato sauce – he can’t pronounce ‘tomato’ – which actually is Tabasco) first thing in the morning because he uttered the forbidden Eff Word when his tower of Lego toppled over. He insists on wearing his Batman/Superman outfit in public, even though you’ve told him that superheroes are supposed to keep their identities secret. He’s adamant that wearing gumboots with his pyjamas is better than wearing slippers, and clomps around the house.

He runs into his room after yelling “pretend I’m having a time-out, Mommy”, slams the door and the house is dead-quiet for a few minutes. Dead-quiet is worrying, so you go into his room and discover him under the bed, with a lighter. He’s burned a hole in his duvet, carpet, singed his skateboard and the underneath of his bed.

It’s hard to be mad with him for flushing my eyeshadow down the loo, or drawing on our freshly-painted walls with permanent marker because he’s just so damned adorable. His dimples have the ability to melt my cold heart almost instantly and when he quietly apologises “I’m sorry for being me, mommy” – how can I possibly ignore that?

So despite the numerous near-heart-attack experiences I’ve had from stepping on squeaky rubber crocodiles in the dark, and tripping over his tanks and battleships – I secretly don’t mind any of his boyish antics. I secretly think that covering the cat in baby oil and talcum powder was an excellent idea, and it actually was hilarious. That cat was so indignant – bordering on murderous, especially once she’d been dunked in an ice-cold bath. I can deal with the fact that having a boy means trips to the ER for strange things. That picture in permanent marker behind the couch is actually pretty cool, and the constant kisses and hugs and being told that I’m the most beautiful, most-best mommy in the whole world” and that he loves me “too, too, too, too way much” kinda make it worth it. As do the scribbled pictures and wonky glued-together arts-and-craft creations made out of toilet paper rolls and uncooked macaroni that get brought home for me from school.

I love how excited he is to see me when I pick him up from school. I love how he’ll kiss me goodbye in the mornings, in front of his friends. Because I know it won’t last forever. Pretty soon – and it’ll come sooner than I can believe, I’m sure – he’ll hate his parents, and he’ll be ashamed/embarrassed to kiss his mother in front of his friends. We’ll have to walk a few steps behind him in the mall, and pretend we don’t know him. He won’t always fit on my lap for a cuddle, or want to lie on my chest and have me stroke his hair while he watches cartoons when he’s ill.

He won’t want to colour in, or play dress-up or go to the park or build space rockets/dragons/robots out of Lego, for that much longer. Before I know it the remote-control cars and the spinning-and-flashing-lights-and-sirens robots that so annoy me with their spectacular noise-producing abilities, will be packed away or given away. He won’t want to watch cartoons or build dinosaur puzzles and fingerpaint in the garden.

He won’t want to do little boy things, because he won’t be a little boy any more. So for now, as much as we possibly can – we try to let him indulge in being a little boy as much as possible. And if this means letting him pee in the garden and burp in public and have ice cream for breakfast, so be it. He’s happy.

Who can fault that?

5 Responses to On Parenting Little Boys