All I Need Is A Bullhorn, A Tazer & A Flame-Thrower

Generally, I’m quite a laid-back person. Despite my parents nick-naming me “Tantrum” as a child, it takes a lot to make me cross. Not lately, however. Despite the baby currently being no bigger than a lentil (or something) it has filled me with a rage of epic proportions. This rage usually emerges in traffic and is entirely unparalleled.

I have now made an oath with myself that I will not let anyone cut in front of me (where lanes merge from 2 or more into 1) if they’re not indicating. Fuck you, I’d rather damage my car than do it. If I can indicate, YOU can indicate. (Yes, this means you, YOU CUNTY BMW DRIVERS) HOW AM I SUPPOSED TO SMELL WHAT YOU PLAN ON DOING IF YOU DON’T USE YOUR INDICATORS?

It’s not on need-to-know basis, it’s not top-secret information, it’s FUCKING CIVILISED BEHAVIOUR TO USE YOUR INDICATORS. So I get a little testy when a non-indicating driver just pushes in front of me, even when there’s not really much space in front of me to do so. (I have spoken before about how much it FUCKS ME OFF when people use my safe following distance as their invitation to cut in front of me). Read this from the Oatmeal. 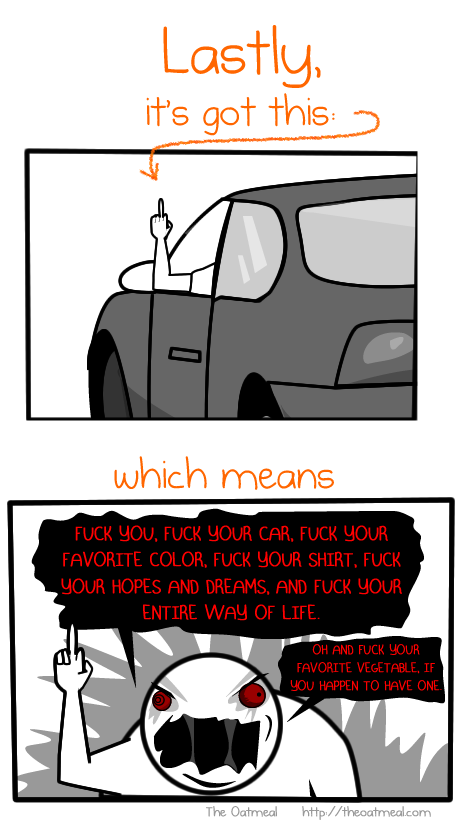 These days it doesn’t take much to reduce me to a foaming-at-the-mouth rage-aholic. 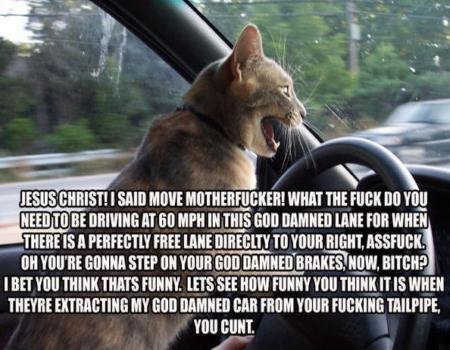 I have to mentally talk myself down from just SLAMMING my foot on the accelerator and ramming my car into the offending vehicle. THERE! HOW DO YOU FEEL ABOUT PUSHING IN IN FRONT OF ME NOW, JERK?! Wanna go again?

Whilst fighting the urge to dissolve into rage of HULKSMASH proportions, I noticed a few things:

It’s always men who are the jerkface drivers (girls aren’t jerkface drivers. girls are generally polite). Wow, men are fucking RUDE and antagonistic. You see I’m a woman and you’re pretty certain I’m not capable of much, so you don’t have to worry about me, so you fucking try and BAIT ME. Case in point: douchebag driver CUTS IN FRONT OF ME SANS-INDICATORS when 3 lanes merge to 2.

The only people who use this little side-stream-about-to-disappear lane are the rude bastards that cannot wait for their turn in traffic – they effectively use this lane to push in front of two lanes of traffic after the robot. They drive straight, from a turning lane, into this non-lane. Because they’re so fucking important that they don’t have to wait to do anything. And then expect ME to let THEM in. WITHOUT INDICATING.

So back to case-in-point douchebag driver. (BMW driver. And yes, a man) Said driver pushes in front of me. I’m mildly ticked off and I give him a WTF-YO (brief) hoot and shake my head. He slams on brakes and refuses to move. Traffic is backing up behind me, and this jerk is not moving. I lay on the hooter. Others lay on the hooter. I open my window. Profanities fly out. Still he refuses to move. We exchange hand gestures. Eventually he moves. By this stage I am fuming. Wishing for a flame-thrower and a rocket launcher. At the very least a fucking bullhorn so he could hear me clearly when I insulted his manhood and called him a limp dick moron.

And as I sped past him down the road, he gave me the finger. I showed him the jack-off gesture while wondering if he’d have done the same if I wasn’t a girl. Would he have been that quick to antagonise me if I was a man? What would he have done if I’d leaped out my car and punched him in the face? Or at the very least given him a small tap with a Tazer?

So now. I am amending my birthday list. I’m taking back my statement to the effect that I don’t want presents. I do want presents. Please gift me the following:

Or, if you don’t agree with any of the above, please get me a chauffeur. Why? 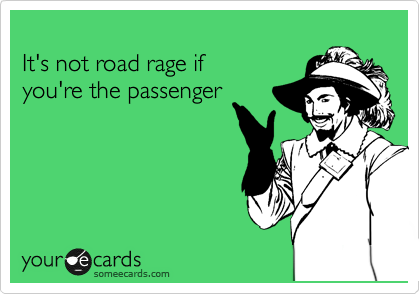 * Also. Quick question. Does tazer’ing someone count as assault?

This entry was posted in life things and tagged hormones, how to make a smart girl feel dumb, life in south africa, me and the K53, pregnancy, road rage, shit that makes me look bad, the world is full of assholes. Bookmark the permalink.

8 Responses to All I Need Is A Bullhorn, A Tazer & A Flame-Thrower