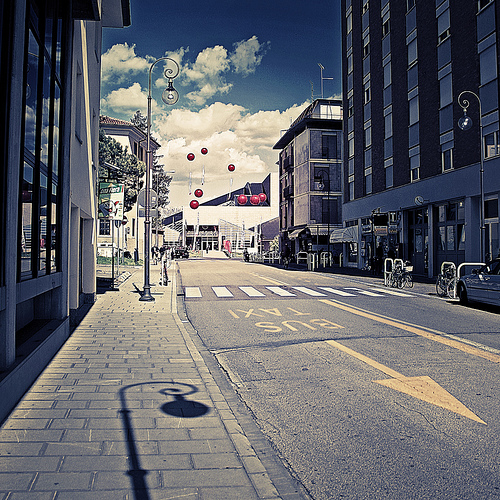 1. I woke up this morning and thought it was Thursday. Imagine my disappointment when I discovered it was only TUESDAY. Don’t you hate when that happens? I mean, it’s like all the days sorta blur into one and you can’t remember if you said good morning to anyone when you came into the office, and then you realise that you actually didn’t, because you were the first one in, before 8AM. Already ready and working. And monday was such a long suck of a day that it felt like it was an entire week’s worth of days. So while Mondays suck, I can say that right now, Tuesdays that should be Thursdays suck more.

2. I only have Breaking Benjamin on my macbook and my iPod. Okay, I lie, I have other music on them, but when I’m working, I’m listening to Breaking Benjamin. When I’m in my car, it’s Breaking Benjamin that’s playing. Don’t laugh at me, that’s me being obsessive. I can’t help it. Besides, I’ve discovered that I’m actually a better Jozi-driver if I’m listening to Breaking Benjamin at top volume and chain smoking. And singing along. If you’re ever a passenger in my car – you’re totally not allowed to judge me. I’d also love to know what other people in traffic think of this little blonde girl listening to such loud music, clouds of smoke billowing out the windows and bopping my head along and singing my little smoke-filled lungs out. Breaking Benjamin is my driving music. But strangely enough, I have parking music too. Don’t judge me okay – everyone has little things that they do/use to enable themselves to concentrate/do something else better. I drive better when listening to and singing along with Breaking Benjamin and smoking, because I’m not concentrating solely on driving – if that makes sense. I’m aware of everything around me, but at the same time, something is distracting me – so I don’t overthink the driving thing – don’t hesitate to take that gap in traffic, or overthink whose turn it is at a four-way stop. Back to the parking music – It’s Perez. I have the CD permanently in my car, and while I was learning to park K53-style (aka parallel parking, alley docking and 3point turn)  it was the sweet, sweet sound of Nick Olsen’s voice and the raw-ness of Mat Wilkinson that helped me through. It was Mamma Mia and Picture Perfect Wasted Out that got me through, that gave me the sense of timing I needed to get those parking manoeuvers down.And when it’s driving, it’s What Lies Beneath and Had Enough and Lights Out.

3. I am busy on a very cool, very super-radical project with some very super-radical people. The visions/plans for this project, and the people involved – all things/people I never thought I’d have the chance to be involved in/with. All a case of being-in-the-right-place-at-the-right-time, I guess. All I can say is that it’s perfect for me, and it will make all the other stuff that I have to do that I don’t want to do (ie: go back to the insurance company and re-write the rest of their policy documentation) that much more bearable. Yes, I know – super-secretive and cryptic, but as soon as I am allowed, YOU KNOW THAT SHIT’S GOING TO BE ALL OVER MY BLOG.

4. I have discovered the brilliance that is Iliza Schlesinger. I was channel-surfing the other night (and by ‘I’ you should know I totally mean ‘The Boyfriend’) and we caught the tail-end of Last Comic Standing, and landed up watching this little blonde girl, with this totally deep voice (someone once told me that my deep voice surprised them, the first time they spoke to me on the phone) and she was talking about her ideal date. Basically it involves them getting shit-faced on red wine, making out for 20-25 minutes, and then him leaving and her going home to eat pizza.  Because when girls are drunk, they don’t wanna get laid, like guys do, they wanna go home and be able to eat without being judged. Anyway. The whole point of the story is this. The Boyfriend thought this chick wasn’t funny. I did. I also discovered that she went on to win Last Comic Standing. Apparently the first  female to ever do so. I thought she was funny. I predicted she’d win. I WAS RIGHT AND HE WAS WRONG. So that’s what that’s about.

5. This just landed on my desk. Okay, I wrestled someone for it (sorta) but it’s mine for the next few weeks. So soon I’ll be carrying two macbooks, one ipod, one blackberry, one hp vivienne tam netbook, one external keyboard and a bluetooth mouse around in my bag. It’s how I roll. You have NO idea how ridiculously PIMPING (I can’t actually think of another word for it) this thing is. There’s just so much GOLD and sparkly bits and the entire packaging is GOLD. Entirely overwhelming me with gold and it just serves to remind me how badly I want a GOLD car. 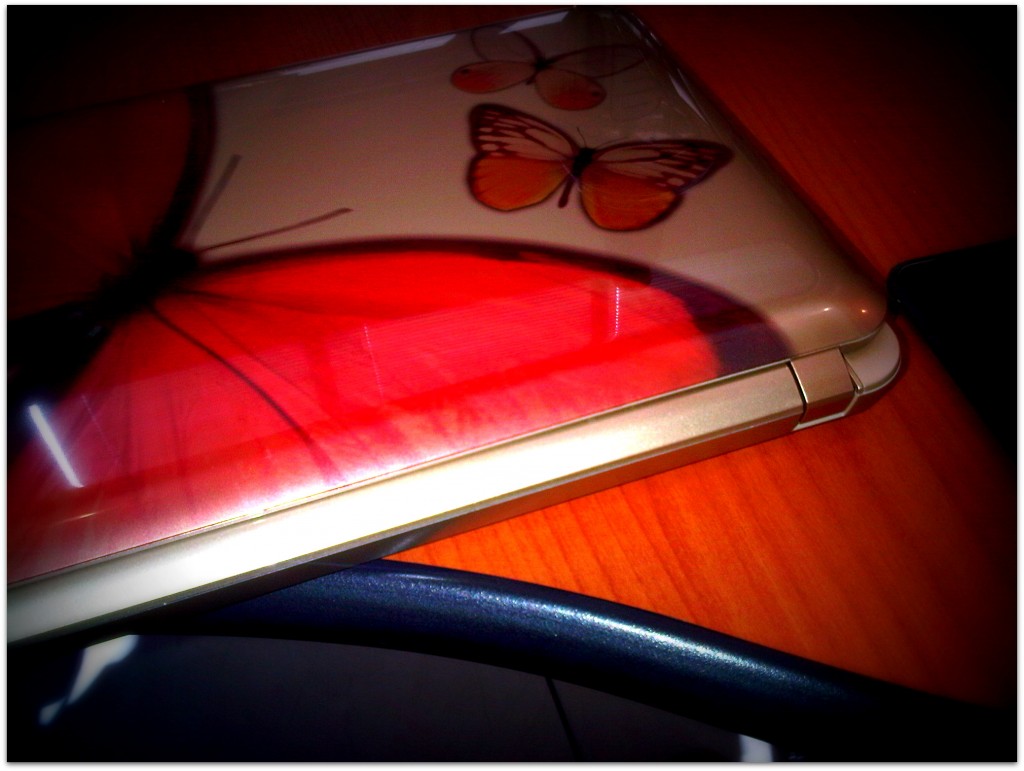 6. I got to have lunch with my Boyfriend today. Okay, it was only for half an hour and it was just at the McDonalds down the road from my office, but still. It was cool to see him during my work day, and it was cool that it was just him and I and we could talk. I’d made him lunch this morning, but didn’t have time to make for myself, and he called me and asked me if he could take me to get some lunch.

7. Apparently my car will only be ready at THE END OF THE WEEK. Which I’ve been hearing for the last two weeks. Seriously. Danmar Longmeadow? Total fail. Don’t go there. Just don’t. They’ve had my car for a collective TWO MONTHS. On FOUR different occasions.

8. I think there might be a little bit too much boobies going on today. The top buttons of my cardigan keep coming undone and revealing my bra. it’s annoying. Although it brings up a certain important question: when is there ever too much boobies?

9. I have run out of cigarettes. Luckily home time for me is in about 20 minutes. Which means that by the time the real craving starts, my Boyfriend will be here to fetch me. All I can say is god help him if he doesn’t have cigarettes in the car.

10. The upstairs loft renovation is turning out to be the BALLACHE from hell. This is a small preview of what my loft looks like right now. All my furniture is outside on the balcony, and some of it gets moved in at night, so I can sit at my desk and (pretend to) work. Except I cant fit my comfortable favourite chair in through the balcony door, so I am SO tempted to move my entire desk outside too. Except then I’d have to look for a long-enough extension cord, and that’s just painful. 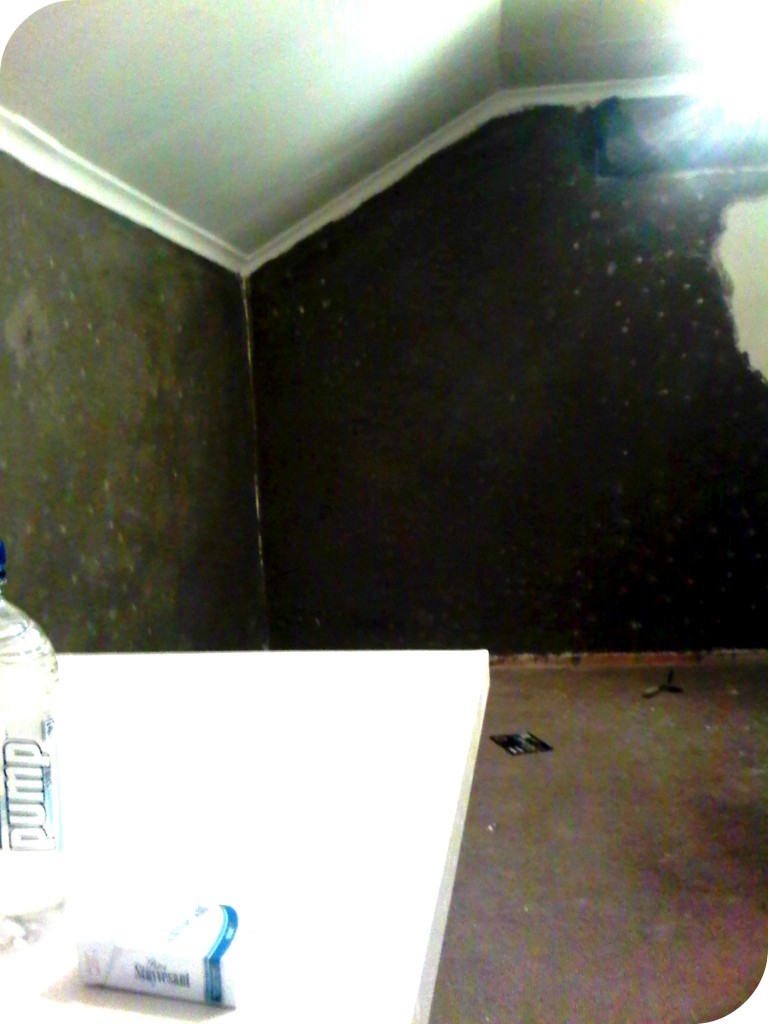 The rhino-liting (aka plastering/smoothing the walls in preparation for painting) has fallen down, or something. So that necessitated the whole lot it being scraped off the walls and done again. From the beginning. So now painting is delayed, because this other process is so time-consuming and finicky. And this means the installation of the new blinds I’ve ordered is delayed too. Because the blinds can only go in once the painting is done and the painting can only get done once all the rhino-liting is done. And until then I sit without curtains, at my desk. Which means I cannot be pantsless while sitting upstairs.

The furniture cannot be moved upstairs either, until the new carpets are installed. And the new carpets cant get done until all the messy painting etc is completed. So it’s all just one big fuck up and I’m going fucking loopy and nothing is where it should be and everything is covered in a white layer of dust and there are smeary fingerprints all over ALL OF MY STUFF and I cannot tell you how much this bothers me.

Can’t I just get a new house instead?

8 Responses to Ten For Tuesday